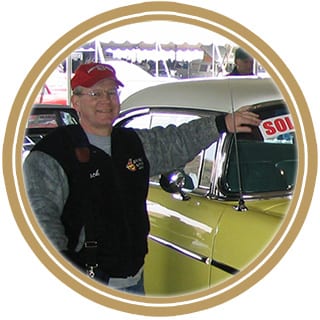 Jack Anderson has been a Certified Vehicle Appraiser in the International Vehicle Appraisers Network (I-VAN) since 2002. He brings to his appraisals a comprehensive background in the collector car hobby and his professional career. Jack has restored and/or owned a number of National Award-winning Chevrolet cars and was the National Judges Training Director for the Vintage Chevrolet Club of America (VCCA) for four years. Jack began working in the property-casualty insurance industry upon graduation from Gettysburg College and was soon supervising a high volume auto physical damage claims unit for Liberty Mutual Insurance Company. In 1985, he earned the Chartered Property Casualty Underwriter (CPCU) professional insurance designation.

Jack’s collector car stable has included award winning vehicles. His 1950 Chevrolet Styleline Deluxe four-door sedan with 25,000 original miles is now in Preservation status within the VCCA. His 1956 Chevrolet Bel Air four-door sedan was a National Award-winner in the VCCA and the Bowtie Chevys/Late Great Chevys/YesterYear Chevys Association, having scored as high as 994 out of 1,000 points in judged competition. His 1956 Chevrolet Bel Air Nomad station wagon won several “Best Interior” awards and set an auction record at $97,000 when it was hammered sold at the January 2008 Barrett-Jackson collector car auction in Scottsdale, Arizona. Jack’s comprehensive nuts-and-bolts, body-off rotisserie stock restoration of his 1955 Chevrolet Bel Air sport coupe scored 998 out of 1,000 possible points and garnered a “Best of Show – Eight Cylinder Era” award at a VCCA national meet in Morgantown, Pennsylvania in August 2019, 400 out of 400 possible points at an Antique Automobile Club of America (AACA) national meet in Hershey, Pennsylvania in October 2019, and a “Best of the Best” award for ALL VCCA vehicles judged at nationally sanctioned regional meets in 2019. His `55 Chevy also received its AACA and VCCA “First Junior” and “First Senior” awards, was nominated for an AACA “National Award” in 2020, and achieved its AACA “First Grand National” award in Virginia Beach, Virginia in May 2022.

Jack began his judging career in 1980 when he helped form the New Jersey chapter (“Garden State Classics”) of the Classic Chevy Club International (CCCI). He judged at CCCI national conventions in Dearborn, Michigan in 1981, on the floor of the Superdome in New Orleans in 1982, and in Hagerstown, Maryland in 2007. In 1983, Jack started judging within the VCCA as a Team Judge but quickly moved up the ranks to Team Captain, Deputy Chief Judge, Assistant Chief Judge, and then Chief Judge at VCCA National Meets. He was appointed to the VCCA National Judging Committee in 1999 and created the VCCA’s National Judging School curriculum before becoming VCCA’s National Judges Training Director in 2001 and presenting the VCCA Judging School all across the country during his four year tenure in this position. He has also judged nationally within the Chevrolet Nomad Association, the Bow Tie Chevys/Late Great Chevys/YesterYear Chevys Association, the CCCI, and the AACA.

Even though a large number of Jack’s collector car appraisals have been for General Motors cars and truck, he has appraised many Ford, Chrysler Corporation, American Motors, foreign, modified, and customized vehicles since 2002. Jack’s specializes in 1964-1972 Chevrolet Chevelles, having appraised over 175 of these models, and 1955-57 Chevrolets. Speaking of Chevelles, Jack was engaged to perform a “forensic” appraisal on a 1970 Chevelle SS454 sport coupe, which had been gifted to the AACA Museum in Hershey, Pennsylvania, to determine its authenticity and, ultimately, donated value for tax purposes. As part of this appraisal, he had to examine and report on each of the cast-in and stamped-in alpha-numeric codes to verify that all of the critical components and assemblies were factory-installed. Jack has conducted many other “forensic” appraisals for clients, again for the purpose of authenticating a vehicle, which is particularly critical when determining its market value. Additionally, Jack has performed a number of pre-purchase appraisals for clients from around the United States AND across the globe, including a 1968 Shelby Mustang GT500KR two-door fastback for a buyer in New Zealand and a 1970 Pontiac Firebird Esprit two-door coupe for a buyer in London, England.

Jack is an accomplished public speaker and regularly presents on “Insurance and Appraisals” to car clubs and other civic organizations.